As I begin this blog, please lead me. Guide my words and thoughts so that they may reflect YOUR word, love and sacrifice.

What if Jesus had been born just 20 some odd years ago, and it was here and NOW that He was roaming the earth performing miracles and spreading the living word of GOD. In today’s world, with youtube and facebook, how would He be received?

“OMG I just saw this guy touch a blind man and he got his sight back! #amazing #miracle”

Okay, take a moment to laugh, it does sound kind of funny. But really. What if suddenly videos were viral and all of the internet was witnessing these miracles. You pull up youtube and there’s Jesus making a crippled person walk, healing the sick, turning water into wine, etc etc. Part of me would like to say that anyone seeing it would instantly believe, but I know it’s not true. I’ve seen the comments on youtube when anyone claims to have done something amazing or awesome. The immediate response is to call it fake, call the person a liar and anyone who believes it is stupid or crazy. Heck, that’s what MANY people say about Jesus NOW.

The fact is, in the end of times, God says even with Jesus’ return, revealing himself and with destruction raining down, people will still not believe. And though the thought saddens my heart, I know God’s plan is perfect.

But that’s not what I’m really wanting to get at, because it’s not my job to convince the non-believers. This post is for the believers.

What would you do if Jesus was here, now? If you COULD see him on youtube and facebook? How would your life change? or would it?

I know many Christians, who if faced with Jesus on earth, would pack up and follow Him. I know I would! Many Christians would be willing to abandon their comforts and “extras” to follow the Man who is the Living Word. They would begin to profess their beliefs and share HIS word with everyone they know. They would become disciples, ministers, fishers of men and women!

But here’s the problem, Jesus is not here on earth right now.

Today, so many Christians have become stagnant and have closed their mouths on what their hearts desire to profess.

Just last night I saw a news interview that really woke me up. A woman was advocating for separation of church and state, which I do not necessarily disagree with, but the interviewer asked her “If they would take “In God we trust” off of the money, you would be happy, wouldn’t you?” and of course, though the lady wouldn’t answer you could tell she would be happy. After that, the interviewer went on a little tangent, about how many Christians have stopped watching TV, stopped watching movies and backed away because they feel that today’s society is a giant attack on Christianity.

Well, it’s true. Today’s society is against us. We have many television networks that have no problem mocking God. We have movies all about blasphemy. And we have our ARMY declaring us as “hostile terrorists”. (Don’t believe me, google it, you’ll be shocked and amazed)

The world is against us. Which makes sense, because we are not of this world. This world is full of darkness and evil, both literal and figurative. And the darkness does not like the LIGHT. In fact, the darkness DESPISES the Light.

Let me just tell you now, it’s not going to get any better either. God has allowed satan reign over the world for now. He has allowed satan and his demons to run rampant among us. This isn’t because God doesn’t care, it’s because He wants people to have to choose Him. He wants people to have the choice, so He has presented us with the option and allowed us to have our freedom.

To hear that in this present darkness, Christians are backing down makes my heart heavy with sorrow.

Never has the need for us to speak out become so necessary. Just watch the news for 30 minutes and you will hear of more death and destruction than we have heard in a LONG LONG time.

It is time for all of us to speak out. To profess GOD and HIS HOLY WORD. It is time to let go of the worldly things and FOLLOW HIM.

Just as if He were walking on this earth now, we have to spiritually follow HIM and seek HIM.

Don’t get me wrong, I am not suggesting that all Christians need to begin preaching at people and trying to save lives.

No. WE ARE NOT CALLED TO SAVE LIVES, ONLY GOD CAN SAVE LIVES.

We are called to do one thing, to be Christians. That means “Little Christ”. It is our DUTY, as followers of God to show HIM in everything we do. I’m not asking for people to become evangelists, I’m simply asking Christians to become unashamed and undignified in their love for GOD.

And people will see HIM through us.

I hope GOD has reached some of you, He has me. I refuse to be quiet anymore. I will profess HIM in everything I do.

Please be with everyone reading this, YHWH, that you will knock and their hearts and call them to whatever it is you have planned.

YOUR WILL BE DONE. 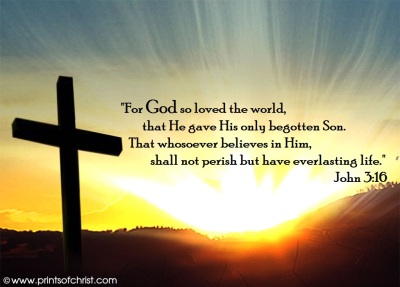 I know it’s been a while since I last posted. There have been many changes in my life over the last 6 months and it’s only recently that I have regained the urge to blog. For a while, it was simply not having a computer, but at the first of the year, when I had a new one, I just didn’t have the urge to post anymore. I was having a difficult time with life in general, actually. Life was getting my goat. First, there is the ever growing anxiety I have about my child starting school this coming fall. I find myself procrastinating when I know I could do some things now, I put them off! Then, there was the ever growing anxiety about my boyfriend not having a job. We were barely scraping by with a LOT of help from relatives. But we still had good times. My boyfriend, my daughter and me. We stayed positive, got cheap treats and did a LOT of walking. Then there was the deep pain and anxiety over the fact that my father has cancer. Those 3 things were really weighing on me and I was not in a very good place. Then one day, I saw a youtube video that interested me. So I showed it to my boyfriend. The video intrigued us so much so, that we stayed up the entire night (Bailey was with her Father) watching related videos in a “chasing rabbit trails” type fashion. What we eventually began seeing was a large amount of satanism in film, music, politics and even seeming religious establishments. We couldn’t believe some of the actual proof we ended up finding on our own. After that night we talked non stop all day about it. That following night we began researching again. At some point, and I don’t remember what video, website, pdf scanned book or theory it was that made it click, but my boyfriend suddenly said to me “God is real. He is real. How do I get saved?” I told him what I personally believe, and what I believe we saw proof of all over the world. That you have to pray to God and ask Jesus to come into your heart. You have to ask for forgiveness of your sins, accept that Jesus died for you, that God created you and you have to accept the Holy Spirit into your heart to guide you. (John 3:16 “For God so loved the world that He gave His only begotten Son. That whosoever believes in Him shall not perish but have everlasting life.”) So, my boyfriend prayed for the first time in his life. Repeating after me, and accepting Jesus into his heart as his Savior. Amen. When he opened his eyes, he looked at me and said “I want to marry you, will you marry me?”, My answer, was yes, of course. We have been together 2 years, he is my little girl’s daddy, they have a bond and he is my best friend. After that, I began to pray. Now, unlike my boyfriend, I have prayed before. Many, many times. There was a point in my life, that I would describe as being “at the feet of my Father” on a daily basis. But after the murder of my goddaughter by her mother, I was angry at God and entered into a Godless lifestyle. Looking back, I see that God was with me through it all. That He was in fact there the whole time. Anyways, I prayed hard. I asked for forgiveness, I begged for acceptance, I prayed that He would please please love me again. After I finished I felt the Holy Spirit comforting me. I felt a weight lift off my shoulders. I began to see God EVERYWHERE! He revealed so much to me in so many awesome ways after that and I cannot wait to share them with everyone. I suppose all of it was really leading up to this blog. I can’t honestly say that I know exactly what this blog will be about, but when I post in it, I will be praying that God use me as a mouthpiece to show people HIS GLORY. Amen. The Lord will be my guide throughout the entire blog. I hope everyone who reads this will remain open minded and open hearted and I encourage you to pray that the Holy Spirit will guide you and reveal God’s truths personally. Not only will I post what God leads me to, but I will take prayer requests and share stories that I feel are uplifting or encouraging. Also, if anyone should have a prayer request, do not hesitate to email me at: WildMommyMC@yahoo.com . I will do my best to respond swiftly! Thank you everyone for your support and help throughout theses times. I hope this journey will help you in any way possible!

Have a blessed day, May God be with you,

Father God, make me humble and obedient. Father help me to only show YOUR glory and give YOU honor with everything I write. YHWH, please send the Holy Spirit to be with every reader, that they might see You and YOUR glory! Jeshua, You deserve the highest honor, for the sacrifice You made so that all may be saved, thank You for all You have done and will do. It’s in YOUR holy and precious name, YHWH, Jeshua, Holy Spirit, that I pray. Amen.